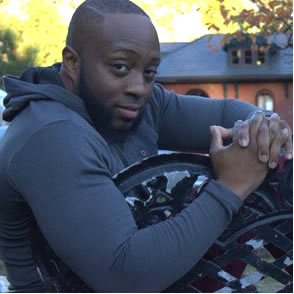 Continuing his education, he went on to Central Christian College of the Bible in Moberly, Missouri where he graduated with a Bachelor of Science Degree majoring in Preaching Ministry. This education has helped prepare Josiah for the work God has called him to do for the Kingdom of God.

Reverend Rogers also attended Greater New Life Ministries where he served as the Praise & Worship Leader, Choir Director, Associate Minister & street evangelist. He currently attends Second Missionary Baptist Church of Huntsville, Missouri where he serves as a member of the Adult Mass Choir and Ministerial Staff. In Missouri, he is the co-founder of the Exalted Praize Gospel Choir which is the “first African American administrated, student led, college gospel choir ever created in Central Christian College of the Bible’s 50 year history. The Exalted Praize Gospel Choir has ministered at Joyce Meyers’s Dream Center, the Gospel Music Workshop of America‘s Gospel Café (both in St. Louis, Missouri), Eagles Heights Ministries, Evangel University (both in Springfield, Missouri), Moberly Area Community College, Central Christian College of the Bible and various other venues.

Reverend Rogers also attend Cincinnati Christian University before transferring to Philadelphia Biblical University to pursue a Master‘s Degree in Christian Counseling. While residing in Cincinnati, Ohio he became a member of the Philippian Missionary Baptist Church where he served as an Associate Minister and male lead vocalist for the Mass Choir. He was also a member of the Six Choir Union which traveled to local churches in the Cincinnati area to sing on the first Sunday of every month. However, being apart of this union he had the opportunity to share the stage with Pam Crumbley (local recording artist and former lead singer for the Charles Fold Singers) which requested him to sing with her on several concerts that she held in the city. However, during the time that he was a member and associate minister at Philippian Missionary Baptist Church where he was ordained as a preacher of the gospel on August 23, 2009 under the leadership of Pastor Rhansyl Harris.

Reverend Rogers has received countless awards in his lifetime from his school, college, church, and community. He has a strong passion for delivering God’s Holy and infallible word through preaching and gospel music.

In addition, Reverend Rogers was chosen to be one of the semi-finalist for Gospel Search of America 2008 which took place in Dallas, TX. He has had the opportunity to minister in Pennsylvania, New York, Missouri, Ohio, Texas, Delaware, Michigan, Indiana, Maryland, and Illinois.

God has currently elevated Reverend Rogers in various such as: being the director of worship and arts at four churches (and assistant Pastor for the Kingdom Experience Worship Center in Brick, NJ, First Baptist Church of Paschall in Philadelphia, PA., Holy Nation Baptist Church, and presently Berean Baptist Church), becoming the author of his first book entitled “The Voice of a Broken Heart,” graduating with a Master of Science Degree majoring in Christian Counseling where he attended Philadelphia Biblical University (now Cairn University). He is also the Founder of The Greater & Better Movement which is a community based ministry that orchestrates clothing drives and spiritual enlightened church services once a month. In addition, he has been in two stage plays which include: Bright Lights & ATL Dreams and Please Don’t Shoot. His lifelong motto is, “WHAT THE LORD TOLD ME WILL TAKE PLACE IN DUE SEASON, IF I FAINT NOT.”