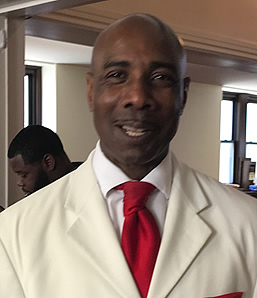 Anthony Gamble was born to Robert and Effie Gamble in February, 1964; he is the 2nd child of 4.

In school, Anthony excelled in Academics and Business Courses such as Entrepreneurial Apprentices, Mathematics, Science and History; he’s a graduate of the Philadelphia Public School System.

Anthony’s first employment was with Craftmatic, Inc., quickly becoming a supervisor, even to individuals two and three times his age. In 1985, he was employed by the Philadelphia Parking Authority for 16½ years. Later he became a Philadelphia Police Officer and through the department, received a number of credits with Temple University in Law courses. While there, Anthony was honored with many citations, medals and some of the highest awards within the department, even from Pennsylvania State Representatives, City Council and many other legal and government agencies. He began work for the Inspector and was chosen to be one of two officers to lead in security for President Barack Obama in a meeting with the Philadelphia Tribune, for which he received a letter of appreciation and thanks; he was just happy to meet the President. Anthony has been a member of the National Safety Counsel for many years. In 2008, he received national media attention for assisting and saving a fellow officers’ life. He has mentored our youth throughout the city, county and churches for “a better life today, with a positive tomorrow.” Anthony gives his time, talents and treasure to multiple agencies, charities and hospital, on and off duty.

He attended Berean Baptist Church with his mother and wife on a 5th Sunday, called “Family & Friends Day,” becoming a member in 1999. Anthony’s father, the late Reverend Robert Gamble, started teaching him in the study of God’s Word, Ministry, Mission, Humility and the Compassion of a Humanitarian. He felt commissioned to take part in a variety of seminars and teaching classes to assist in the development of understanding the word of God. In 2001, Anthony led Berean’s first “Spiritual Party Worship Service,” where all the men in attendance would dedicate themselves to the Lord, instead of a “Bachelor’s Party.”

He was later appointed a Deacon and a member of the “National Baptist Association” where he became the Vice President of the North Philadelphia Chapter of the Laymen’s Division, developing a Men’s Study Group called, “Fishers of Men” to apply Godly advice and a fellowship applicable to the mental health and self-examination of men, contemplating on our actions toward handling today’s issues. A “Restoration Ministry,” in which seniors homes received cleaning and repairs.

Anthony is married to Geraldine; they have been together for 33 years and have 3 daughters, along with eight grandchildren.

His salvation scripture is Romans 10:9, “That is thou shalt confess with thy mouth the Lord Jesus, and shalt believe in thine heart that God hath raised him from the dead, thou shalt be saved.” Anthony’s purpose is “A Healthy Church” and the theme is “We Still Have the Good Shepherd (John 10:11, 27) and finally, his mission is “Prepared Conditions Suitable for an Undershepherd!”